Empowering parents to become equal partners in the education and support of their children at school.


Good Hope Foundation is working with the Parents teachers association and school management committee members from the schools it’s working with from the two sub counties of Kisinga and Karusandara in creating safe learning environment at the schools to prevent violence against children and adolescents in schools. On 16th and 17th March 2017 good hope organized a brief meeting with the school committee members of Kiburara and karusandara SDA primary school to discuss key issues undermining safe learning within the school that needs parents’ attention as well planning for the general parents meetings. Among the key issues identified during the planning meetings included; water problem and midday meals at Kiburara primary school, pit latrine, urinal places and midday meals at Karusandara SDA primary school.
0n 23rd and 24th March 2017 respectively good hope supported the management to organize general parents meetings with the main objective of enhancing parents participation in the school planning processes for purposes of creating child friendly environment in schools as well as empowering parents to become equal partners in the education and care of their children through sensitization and engagements. 253 (85M and 168F) parents attended the general parents meeting including the Inspector of schools Busongora south, Community development officer Karusandara Sub County as well as the political leaders.  The community development officer while communicating to the parents he informed the parents on the roles and responsibilities both parents and government in ensuring good learning environment for the children at school and he called upon both parties to fulfill their roles and responsibilities.
The inspector of schools in her communication, she educated the parents about the value of education, she could not also leave without talking about the midday lunch for the pupils were she advised the parents to work with the teachers and begin providing midday meals for the pupils for purposes of improving academic performance of the school as well as keeping children in school. She also talked about the issue of parents not providing scholastic items for their children and she called upon parents to always ensure that their children have all scholastic items when coming to school. She also talked about positive parenting were she called upon parents to give as much time as possible to their children in order for them to be in position to identify their needs and other risky behaviors, on the same issue of positive parenting and she discouraged parents from beating as a way of disciplining children rather to ably communicate to their children whenever they do mistakes. She advised parents to also pay attention to the girls as they face several challenges as they under biological challenges which increase their risk to be violated. She lastly talked about the increased domestic violence in the households that also influences children’s behaviors and practices at school, community and at home.
Accordingly among the key issues presented and discussed by the parents were; midday meals and water problem at kiburara primary school. It was mentioned that during the previous parents meeting it was resolved by the parents that all children should be taking lunch at school however it was reported that only few parents were able to give in their lunch contribution which has limited the implementation of the initiative at school.

On the water problem the head teacher reported that he has tried to reach out to several offices for help but nothing has been achieved. He said this has become a serious problem to the school as it is affecting the health and sanitation of children and that some children are missing classes as they go to collect water which is collected 5 kilometers away from school. He added that without solving this water problem even the midday meal program for the children will not be effective. He then called upon parents to work upon these two issues as soon as possible. 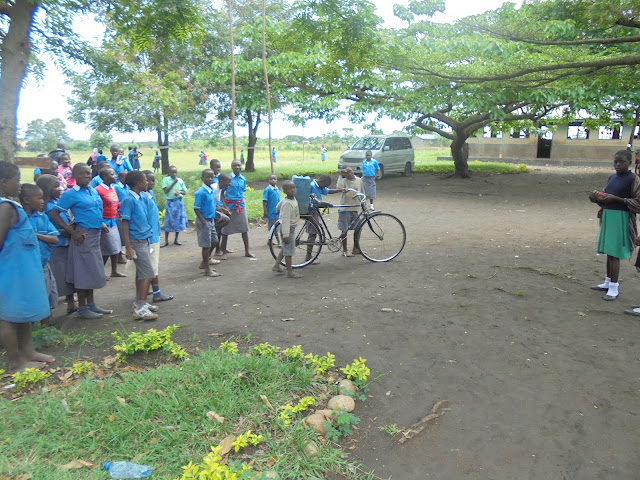 Children participating in water collection for the preparation of their school lunch
At Karusandara SDA primary school, the discussion primarily focused on hygiene and sanitation were the management and parents cited the problem of the school not having latrines and urinal places both for the teachers and children. Currently the school has one latrine and it is in poor state anytime it is sinking and its used by the whole school. The school has no urinal places; children and teachers use the neighboring bushes as urinals.
As actions
Parents from kiburara primary school resolved on buying a 1000 litre water tank for rain water harvesting. They divided the money among the children and each parent will contribute 2500 shillings per child. They gave themselves one month to have paid all the money. On that very day some parents contributed theirs, Good Hope also supported the parents towards the purchasing of school water tank with cash of 400,000 shillings. The money that was collected that very day was handed to the management to go and deposit it on the tank.
On the midday meals, parents of kiburara resolved on contributing 10kgs of maize flour, 3kgs of beans and 5000 shillings per child. They emphasized on parents who have children in p.6 and p.7 to pay as a must.
For Karusandara SDA primary school on the issue of midday lunch, children resolved that the school should allocate a piece of land among the school acres and be used as school gardens to plant food crops for the children.
On the issue of urinal places, parents resolved that teachers should ensure that temporally structures be put in place as urinals.
On the issue of pit latrine, parents resolved that by Wednesday 29/March 2017 the work of constructing a latrine should have started at school. They developed a budget and each parent is to contribute 10,000 per child, while others committed themselves to give in kind labor on Wednesday and Thursday during its construction. On this Good Hope Foundation also gave in inkind support worth one million (1,000,000) towards the construction of a pit latrine.
The inspector of school assured the parents that if this latrine is not constructed as soon as possible, she is going to close the school.


Good Hope foundation neighborhood assembly model which is a local parliament/platform through which community members identify their community challenges, discuss and reach community based solutions to the challenges in consultation with their leaders in enhancing Positive parenting practices at family and community levels to prevent violence against children and adolescents in their communities and households.  Good hope foundation organized visits to the sub counties of Kisinga and Karusandara to gather information on violence against children and adolescents and among the information gathered included; the magnitude of violence against children and adolescents in the respective Sub counties, forms of violence in the households and communities as well as barriers to positive parenting. According to the CDOs and CFPUs there has been an increase in reporting cases of VAC were from January to February in Kisinga they have received 31 cases (15 males victims and 16 female victims) while for Karusandara they received 22 cases (14 female victims and 8 male victims). All these were attributed to poor parenting practices in the families and communities. Key issues that need attention include the following; domestic violence, household poverty, alcoholism and drug abuse, parental and children’s roles and responsibilities.

On 10th and 12th March 2017, Good Hope organized two (2) neighborhood assemblies in Kisinga and Karusandara sub counties as a platform for community members to discuss community challenges in regard to violence against children and coming up with local solutions to the challenges. For Kisinga it was held at Kisinga trading center while for Karusandara it was at Kivengenyi trading center. Over 450 people attended these neighborhood assemblies (213m and 237f). Among those who attended included; the CBO members, police (CFPU), CDOs, vice chairperson LC3, community children activists as well as the local leaders. The neighborhood assembly was intended to increase awareness and understanding about issues related to good parenting habits and parental responsibilities as well as creating a platform for the community members to come up with community based solutions on enhancing positive parenting in families and communities.

Key issues brought by the community members that increases violence against children included;
As part of actions from the neighborhood assemblies, members suggested the following;