The Meeting revealed facts about Kasese Conflicts and the following were highlighted as common Conflicts in the District;
·        Land conflict between the cultivators and the pastoralists whereby Cultivators critic the method of land allocation. Pastoralists were given more land than the cultivators during settlement but they still grab the cultivators’ land to graze their animals which destroy the cultivators’ crops,
·        Cultural conflict between Obusinga Bwa Rwenzururu (OBR) and Obudingiya Bwa Bwamba(OBB)which is believed to be caused by Politicians who are using these  cultural institutions to front their political interests for selfish benefits,
·        Civil-Military conflict where the military is alleged to have attacked the Obusinga Bwa Rwenzururu cultural institution for political purposes,
·        Human life versus wildlife conflict especially frontline communities of the National Parks feel they are not considered and given protection against the wild animals that destroy their crops and yet they don’t realize what they benefit from the national park,
·        Population pressure on land attributed to polygamy and absence of good family planning practices where a man after producing so many children and the land is not enough to produce for their needs leaves everything to God for intervention. In another perspective also refugees were settled on the land of the indigenous people who claim ownership of it,
·        The driving force for conflict in Kasese District is said to be politics for those interested in achieving their selfish motives,
The Kasese District CDO representative Mr. Bweruka Wilson also commented on domestic issues as seriously causing a lot of conflicts in the communities, “Even if you struggle to control or end other conflicts without giving priority to Domestic violence, then you are missing a point”  this opened up a discussion on the causes of Domestic violence as below;
·        The men have run away from their responsibilities leaving  women as the sole bread winners of the families,
·        Laziness and poor body hygiene by especially women,
·        Mis-interpretation of policies (rights of women and children),
·        Poor communication among couples,
·        People no longer respect family values and morals,
·        Traditional beliefs that for instance women cannot own valuable assets like land, women are supposed to be submissive under whatever circumstances,
·        Poverty in homes especially when man fails to provide for his family then the wife starts despising him since she can go to a saving group for a soft loan to cater for her own needs, women also may opt to have extra-marital relationships with the men they feel  have the potential to cater for their needs,
·        Miss use of information technology especially Women elites who are ever on whatsapp and face book and  having  no time to look after their spouses ,all work is left to maids including cooking for the husband  hence making the husband develop an attachment to the maid which again causes conflict,
·        Women involved in business return home very late and have no time to do their house hold chores,
·        Also the traditional belief that a woman is supposed to be fed ,dressed and catered for in all aspects i.e. dependent on man causes domestic violence because when the man fails to provide for her ,then conflict erupts,
The discussions that brought to light more changes being witnessed as a result of implementing the community action to prevent and Manage Conflicts and Human Rights Violations in Rwenzori region and specifically Kasese suggested the following action points for sustainable Peaceful Co-existence and human rights promotion;
·        More youth should be reached through  institutions such as schools and churches,
·        Youth existing enterprises should be boosted instead of supporting those with no tested  experience for youth economic development,
·        The youth should be sensitized on the youth livelihood fund  and equipped with Practical business skills,
·        Local leaders ought to be engaged in making follow ups on the youth in sub counties,
·        Government has to revise the formula of supporting livelihood programs. Support ought to be given to individuals instead of supporting groups because projects owned in groups are causing conflicts and delayed impact,
·        Sensitization of parents on parenting skills is key for sustainable Peace and Human rights observance as well as instilling good values and morals in their children. “A stable Nation is only possible with stable families”,
·        Project Mid- term review report should be shared with stakeholders for ownership.


He also added that greed, poverty, miss-interpretation of rights by local people are escalating Conflicts in Kasese District. “In Katwe Kabatoro town Council for example, Salt Lake is popularly known here, for salt mining, but farmers have started cultivating around it causing silting. This is causing another conflict and as leaders, we must protect the lake” said by Deputy RDC about greed.
Posted by Unknown at 05:36 7 comments:

YOUTHS, LOCAL LEADERS AND COMMUNITY MEMBERS ADVISED TO BE SENSITIVE ON VIOLENCE AGAINST CHILDREN AND ADOLESCENTS ISSUES 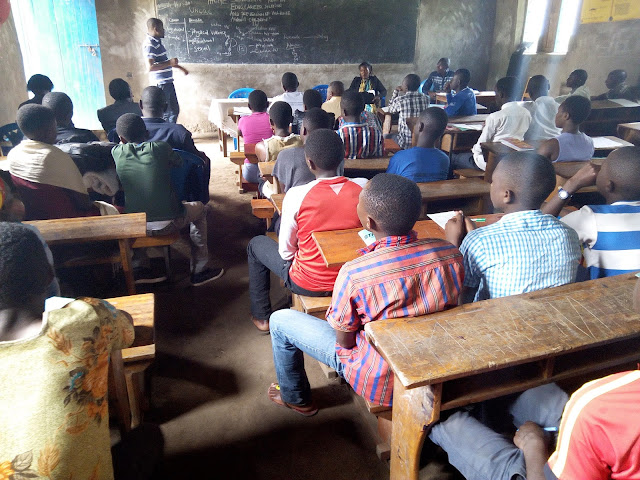 ·     Families and community members should be sensitized on the use of family planning practices to reduce family burden
·         The youth and adolescents were called upon to have respect to themselves, to their parents, elders and to their young sisters and brothers in order for them not to be violated and not to cause violation to the youth ones.
·         The youths were also called upon to work closely with their parents in bringing about development in their homes.
·         They were also advised to be God fearing youths and adolescents as this will protect them from engaging in acts that increase violence against them and against the young ones.
·         Creating opportunities for parents to talk with other parents
·         Efforts should be directed towards building peace and love in the families
·         Involving bodaboda riders in the prevention of violence
·         Religious leaders, teachers, paralegals  and the elders to be involved in mobilizing community members towards preventing violence against children and adolescents especially instilling good parenting skills as well as popularizing the bi-laws of the sub county.
Posted by Unknown at 05:11 No comments:


On 4th and 5th August 2017 good hope organized two (2) school management meetings at Kenyange primary school and Kisinga Vocation secondary school which aimed at share and discuss key issues that contribute to violence against children and adolescents in the respective schools and then to come up with initiatives that can address the identified issues to reduce children’s vulnerability to violence in the respective schools. The meetings involved members of parents-teachers association (PTA) and the school management committee members (SMC) of the sub county leadership from the two sub counties of Kisinga and Karusandara who included the CDOs, councilors, chiefs, and the secretary for production. 30 (10f and 20m) members attended the meeting.
Among the key issues identified and discussed during the meeting included; the lack of learning space for the pupils at Kenyange Muslim where the class room block was taken off by the strong winds that hit the sub county in 2016 and up to now the school has been un able to roof again the block. Currently pupils use the tapeline that was provided by save the children as the class room. This has made the learning environment for children unfavorable especially during the hot and rain season thereby affecting the learning capacity of children.

Members at Kenyange Muslim also raised another issue on limited engagement of children in co-curriculum activities such as sports, MDD which was attributed to the abscess of playground at the school, sports items such as balls, MDD kits such as drums to mention. This has always violated the children’s right to play and also increasing the chances of children not to stay and complete school.
Members also commended on the decreasing school enrolment which members attributed to un seriousness among the teachers, religion where the school has been treated to be only for the Muslims, and then the weak management.
At Kisinga vocation secondary school, members showed concern on the increasing behavior of alcoholism among the adolescents, students escaping in video halls at the trading center which increases the risk for them to be subjected to violence in and outside the school
Additionally member mentioned the issue of lack of suggestion box for the children which limits the platform for students to share with the administration what they pass through and their grievances for addressing by the administration.
The management also highlighted the need for the washing room for the girls at school mainly for the nonresident students where they said girls have been seen being chased from the hostels when they try to go and work on themselves during their menstruations and this has made some girls to always miss classes whenever they are on their menstruation
Key suggestions from the meetings
The management of Kenyange Muslim and the sub county leadership of Karusandara suggested that there is need to put up a playground for the children and strengthen the co-curriculum activities at school as a way motivating children to love the school, stay and complete school. It’s away also of managing psychological torture among the children.
The management also suggested organizing visits in churches to popularize the school among other religious faiths in order to mobilize for more children to join the school
The sub county leadership and the management also suggested that there is a need for an urgent work on the classroom block for the children. On this they suggested to approach the area member of parliament and the sub county for assistance.
Members Kisinga Vocation secondary school suggested that in order to address the issue of students engaging themselves in alcoholism and video halls, there is to procure a school video screen for the students to be used by the students during a specified day and time. This will help in occupying the student’s time thereby reducing the chances of them from engaging in risky behaviors and being violated. However they added that it should be used to watch educative items.
Members also suggested that there is a need to put up a suggestion box for the students to share their challenges and grievances the administration for quick response.
Key resolution
The supported PTA/SMC school initiatives included;
The management at Kenyange Muslim primary school agreed that the class room block should be roofed as soon as possible where members said by the end of the holiday it should have been roofed. Good Hope Foundation supported this management initiative both financially and in-kind
At Kisinga Vocation secondary school the PTA/SMC agreed that they will be procuring video set for the students. Good Hope Foundation also contributed financially towards this initiative.