14th May 2017 was the day Umbrella for Journalists in Kasese celebrated press freedom day at Karusandara Primary school in Kasese District, postponed from 3rd May 2017. The theme of the day was; Critical Minds for critical times; media’s role in advancing peaceful, just and inclusive societies. The theme was built on the understanding that; Justice for all is a prerequisite for freedom of expression and sustainable development, promoting the media’s potential as a catalyzer of peace and mutual understandings, and freedom of expression and freedom of information fostering more inclusive societies.
Good Hope Foundation for Rural Development joined and supported Umbrella for journalists in Kasese to support four football clubs from four Parishes of Karusandara to play football for peace friendly matches at Karusandara Primary school playground. These clubs included; Kanamba FC from Kanamba Parish, B United FC from Karusandara Parish,Kivengenye FC from Kabukero Parish and Kibuga FC from Kibuga Parish. By the end of the day, B United emerged the champion and Kibuga FC the runners up.
Among the leaders who turned up and made several speeches concerning youth inclusion in Peace promotion included; District Woman Councilor, Karusandara Police OC, Police CID, Parish Councilors, Parish Chairpersons and LCIs. The event was boosted by the sub county FPAs and general team of Journalists in Kasese who also passed Peace and human rights information to the Youths. Over three hundred fifty (350) youths turned up for the football matches.

During the speeches and discussions, the following issues were raised;

During discussions, the following recommendations and immediate follow up actions were suggested;

The event ended with handing prizes to the champion and runners up by the District Woman Councilor of Karusandara Sub county who thanked Good Hope Foundation, in her closing remarks for teaming up with Journalists who can either escalate conflicts or prevent them through reporting,  and thanked them for the great work they have been doing in the sub county under different projects but majorly; prevention and managing conflicts and human rights violations and mobilizing communities for peaceful co-existence, not forgetting the youth who are very active in most conflicts.

Good Hope foundation in implementing a community driven approach to prevent violence against children and adolescents in kasese district will be the model couple approach to work as change agents as far as parenting is concerned through influencing and changing the parenting practices among the fellow couples and families in the neighborhoods through organizing sharing and discussion visits to the neighboring families and participating in radio talk shows on parenting. Good Hope Foundation mapped and identified four (4) model couples per sub county making Eight model couples from the two sub counties of Kisinga and Karusandara all neighboring the schools we are working with within the respective sub counties.

On 4th and 5th May 2017, Good Hope Foundation organized a training session for the model couples in the two sub counties of kisinga and Karusandara. Eight (8) model couples were trained on parent-child communication skills, parenting styles, guidance and counseling. The training was for the purposes of strengthening model couples positive parenting practices skills at family level targeting 8 couples in 2 sub-counties in Kasese district with the main objective of equipping model couples with knowledge and skill on positive parenting practices as well equipping them with skill on public speaking and media presentation.

Key areas of training included; understanding the concept of model couple looking at the characteristics of a model couple in relation to positive parenting. A model couple a family of man and woman living as husband and wife with their children, the couple that is recognized by the community as husband and wife living under the same roof, the family that has basic household needs like- main house, detached kitchen and latrine, bathroom, dry rake, hand washing facility with soap,  garden for food security in case of rural families, a couple that knows the value of education, a couple who is mindful of children’s basic needs, as well the couple that is able to share their experiences in child up-bringing, farming and community participation including any innovations that have enabled them to bring up children using the means available at their disposal.

Other training areas included; understanding the concept of violence against children and adolescents looking at the forms, causes, effects and how it can be prevented;  understanding the concept of positive parenting mainly looking at the aspects that can help in achieving positive parenting such as behavior control, respect for Individual autonomy, modeling appropriate behaviors, positive communication skills, provision and protection looking at the roles and responsibilities of parents/guardians. The participants were also skilled in media and public speaking were we concentrated on giving model couples tips on public speaking and radio presentation looking at how they can prepare themselves for the radio talk show before, during and after the radio talk show. 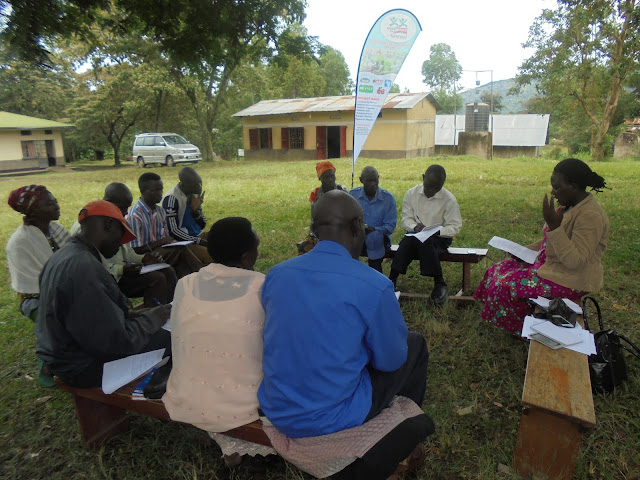 YOUTH AND WOMEN GROUPS SUPPORTED TO ENGAGE IN INITIATIVES GEARED TOWARDS PREVENTION OF VIOLENCE AGAINST CHILDREN AND ADOLESCENTS.


Following the 2016 recent conflicts that erupted in Kasese district that left many families losing their dear ones as well as increasing violence against children and adolescents especially through impacting on the parenting mechanisms of children in the families and communities, Good Hope Foundation in collaboration with ECOS band peace ambassadors on 1st/5/2017 organized a community sensitization session on violence against children through Music Dance and Drama at Kyatoke trading center in Buisembu sub county. Over 600 people attended the session including the sub county chairperson local council three, the district councilor, security officers, religious leaders and other local leaders.
While highlighting on the impact of conflict, the chairperson LC111 said that as a result of this recent conflict the sub county has registered an overwhelming number of orphans totaling to 200 orphans, many children have dropped out of school, and that many families can no longer meet the children’s basic needs. Through the music dance and drama, key messages passed included;
Educating community members on the value of education while highlighting the parent’s roles and respomsibilities in fulfilling the child’s right to education. To illustrate this, Good Hope Foundation together with ECOS band peace ambassadors supplied exercise books to over 100 children during the event.


They also commended on the practice of shop keepers selling alcohol to children where they called upon local leaders to implement the district child protection ordinance on protection that prohibits shop keepers and bars from selling alcohol to children.
They also called upon families to fully participate in food production for them to be able to parent their children.
A message on peace and love in the families, communities and schools was also passed while communicating that if violence against children and adolescents is to be reduced peace and love must first be in families, schools and communities. Additionally a message commending on the practice of adults using beating as a form of punishing children was also passed while calling upon parents to stop beating and start using alternative punishments.
The band could not leave calling upon parents to engage themselves in income generating activities as a way of fighting against household poverty thereby facilitating positive parenting. They encouraged parents to join savings and credit groups and also to start income generating projects at home like animal and bird keeping as this will help them to be in position to meet the children’s needs.

The sensitization event aimed at;
·         Creating massive awareness about Peace building, conflict management and Human rights to local people of greater Kitswamba and Bwesumbu sub county in particular.
·         Mobilizing at least 400 local people as peace and human rights ambassadors in Busongara North Constituency.
·         Providing counselling to the Kyatoka residents, following the recent loss of lives by many families of over 30 people during the November 2016 attacks in Kasese District
Several issues were raised by different Speakers and among others included;
·         The Kasese District November, 2016 killings left two hundred (200) orphans and thirty two (32) widows in only Bwesumbu sub county.
·         People still live in fear and lost trust for armed forces.
·         Over thirty (30) Males lost their lives at Kyatoka trading centre gunned down by government forces.
·         Keeping law and order is not only to civilians but also to armed men and women. It was observed that armed forces in several ways have violated civilians’ rights.
·           House hold poverty is largely leading to Domestic violence and youth becoming susceptible to being lured into conflict and human rights violation actions.

The key recommendations below are worth considering for sustainable Peace and human rights promotion in Busongora North Constituency of Kasese;

The day was summed up by amplifying the Labour Day theme: “Building the nation through good Work ethics” meaning every one as a worker has a responsibility of  practicing good ethics that do not trigger a conflict and violate other person’s right.